What Is Cayenne Pepper?

Cayenne Pepper, also known as Red Pepper, Guinea Spice, Cowhorn or Bird Pepper, is best known for its use in cooking, but has recently become a big name in the world of weight loss. This is because Cayenne Pepper is rich in capsaicin, which is the compound responsible for the 'hotness' of chillies. Capsaicin has been shown to have properties that can help people shed excess pounds, and as a result, Cayenne Pepper has become a popular ingredient in weight loss formulas and cleanse diets, including the Master Cleanse, which did wonders for the reputation of this previously unglamourous pepper with its raft of celebrity endorsements.

Where Does Cayenne Pepper Come From?

Cayenne pepper is named after its supposed place of origin, the city of Cayenne in French Guiana, and it is now cultivated in many tropical and subtropical areas throughout the world, including parts of India, Africa, and North and South America. The pepper is the fruit of a small plant named Capsicum annuum. It may be used fresh, but it is most commonly dried and ground into a powder for ease of storage and incorporation into food.

Cayenne Pepper benefits weight loss in a number of ways, as a result of capsaicin, the active ingredient. Firstly, capsaicin has been shown to suppress the appetite (1). When it is taken with a meal, it has been shown to increase the overall energy expenditure by the body, predominantly as a result of heightened carbohydrate oxidation (2), and when used in the long term, studies have shown that capsaicin is able to enhance the oxidation of fat, and that it is particularly effective in redistributing abdominal fat (3). On top of this, it has been shown to enhance thermogenic activity in a heat-generating type of fat called brown adipose tissue, and to prevent the formation of new fat cells (4).

When applied topically to the skin, Cayenne pepper also has analgesic properties. Creams containing cayenne as an ingredient can be useful in the treatment of pain (5)

The weight loss benefits of Cayenne Pepper are very useful to those who are cutting. Because Cayenne Pepper is all natural, readily available and has a significant effect on the amount of energy that is used by the body, it is often included as part of a weight loss stack.

Cayenne Pepper is a mild and effective natural treatment for pain, so it can be helpful in the treatment of post exercise muscle soreness.

The most obvious side effect of Cayenne Pepper is the heat. Some people have no trouble ingesting Cayenne Pepper, which is relatively mild in comparison to some chillies available, but those who are sensitive to spicy food may find it very difficult to take. Solutions include mixing the powder with a dairy product like cottage cheese or yoghurt, which many people find lessens the heat, or using Cayenne pepper capsules to avoid irritation of the mouth.

Unfortunately these remedies will not be much help to those people for whom chilli causes heartburn, but an antacid may help minimise these symptoms. People who are highly sensitive to the effects of cayenne pepper may experience vomiting and diarrhhoea. It is not uncommon to feel a burning sensation when the pepper exits the body.

Capsaicin, the active ingredient in Cayenne Pepper is an irritant. People are strongly advised to wash their hands well after touching Cayenne Pepper, and to avoid contact with eyes, nose and other sensitive areas of the body.

High consumption of Cayenne Pepper has the potential to affect blood clotting. People who are taking blood thinning medications or who have a pre-existing condition, particularly one that affects the digestive system, are advised to consult their doctor before supplementing with Cayenne Pepper.

The good news for people who are sensitive to Cayenne Pepper is that scientists have identified potential for assisting weight loss in a group of chemicals called Capsinoids, which are related to Capsaicinoids. As the name suggests, Capsinoids also derive from plants of the Capsicum species, but unlike Capsaicin, the active ingredient in Cayenne Pepper, Capsinoids are not 'hot'. This research may lead to the development of supplements that have the metabolism boosting effects of Cayenne Pepper without the irritation (1). 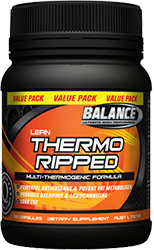 To avoid side effects, it is best to take Cayenne Pepper with meals. Many people start off with a smaller dose and work their way up to one teaspoon of powdered Cayenne Pepper, three times a day.

Cayenne Pepper is often taken by itself, but it is very effective when combined with other weight loss ingredients. A number of supplement manufacturers have taken advantage of this. Some of the leading products which incorporate Cayenne Pepper include Hydroxycut Hardcore Elite and Balance Thermo Ripped.