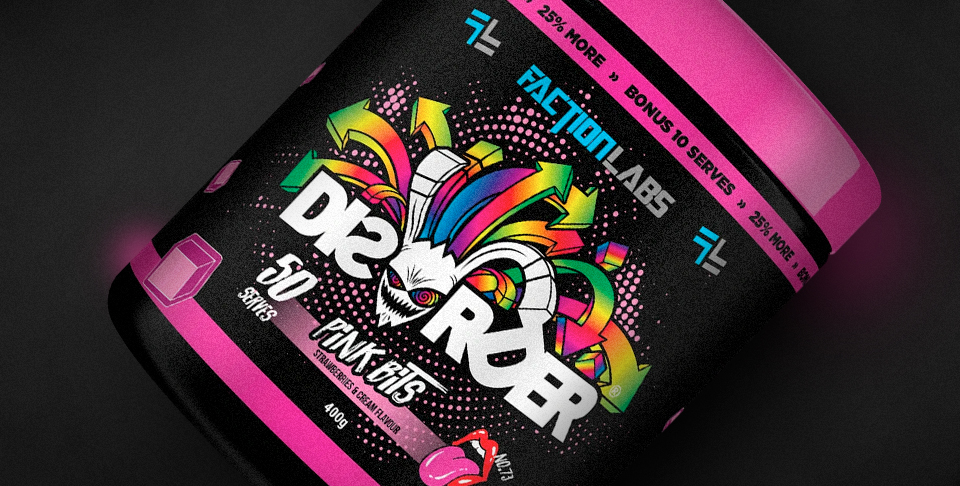 August 2019 and Disorder a new pre-workout, manufactured by a new supplement company namely Faction Labs hit the shelves around Australia. Oh no! I know what you’re thinking, “not another pre-workout”. Right? Well, I’m here to tell you wrong, Disorder isn’t just another pre-workout. It’s been launched with lots of thought behind it and as such, it ticks lots of boxes. Let’s then have a look;

The first thing you may notice about the ingredient panel is that there are copiously high amounts of actives including 500mg of caffeine anhydrous, 6000mg of citrulline malate, 3200mg of beta-alanine etc. Fantastic! This in our industry is what's referred to as fully dosed, meaning the actives are not simply small amounts but rather full amounts that are going to be efficacious or produce the desired result. The ingredient list also is complete in that there is a long list of well known and well-studied ingredients. The recommended dose on labelling is for a one-full scoop (1). Importantly though the nutritional information on the label is for both one full scoop (1) or two full scoops (2). Thus if you want the full efficacious dose it would require two scoops. This also means the jar essentially comes in your choice of 50 regular 1 scoop serves or 25 fully dosed 2 scoop serves. The choice is yours.

Rather than publish the full nutritional panel let's just break it down for you covering the three main ingredient categories which are; 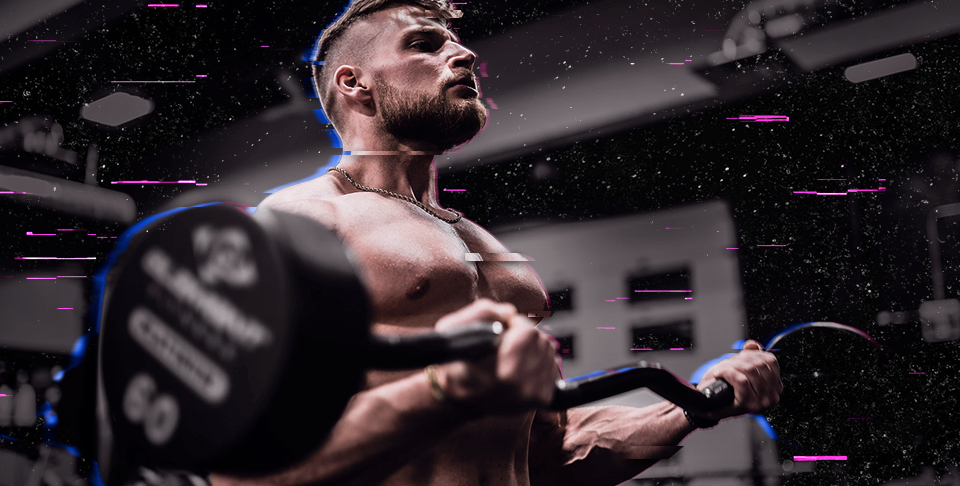 In a taste-testing conducted by Mr Supplement staff, the unanimous best flavour award went to Disorder Red Russian. We’d describe this flavour as being similar to Red Frog and truly delicious. Actually, we found all the flavours to be tasty and would rank the other flavours in order of Purple Reign Green Haze & Pine Lime Yellow Fever followed by Blue Pearl. Or you personally may like the newer released flavours including Orange Firm Orange-Mango, White Snow Vanilla-Cola or Black Fire-Juicy Grape. Really though it’s a great tasting pre which when it comes to taste you can’t go wrong. Added to the flavour choices additionally in February 2021 is Pink Bits, described as a spritely strawberry. The pink bits flavour on launching was a Mr Supplement exclusive (only available via Mr Supplement). Launched mid to late 2021 also was three further exciting flavours including Golden Shower which is a lemon tang, Brown Sugar which is peach tea & the fantastic tasting Rainbow Warrior which is a bubble gum ice cream.

Now for those that want the option of trying all flavours in a cost-effective way, why not buy the Disorder Variety Pack. Launched in early 2022 the Disorder Variety pack offers one of each flavour in a single-serve sachet. It's available for a price under $30 and shall ensure you'll never get bored of the same taste.

Containing the tried and tested synephrine (also known as bitter orange or citrus aurantium), the recently popular ingredient cocoabuterol and of course caffeine anhydrous, the stimulant or energy formula is non-complicated and to the point. Is it strong? You bet and with 500mg of caffeine per double scoop, there is not another pre-workout that comes to mind with a caffeine content that exceeds Disorder. This is a whopping amount of caffeine that caters for experienced stimulant users.

In taking 2 scoops of Disorder which is what we believe most users shall ultimately use (after perhaps beginning on a 1 scoop). We found the energy and focus absolutely fantastic. Training legs for a 45-minute session “it’s fair to say I wanted to keep going with loads of motivation, the weights also seemed easier to lift plus recovery for the next set seemed faster”. Generally one may expect to feel pretty good on it with a positive mindset thanks to the nootropics in the formula. The pump was pretty good too although we would recommend a different pre-workout if it were a crazy pump you were chasing. All up though this is a serious pre-workout sure to have you fired up. 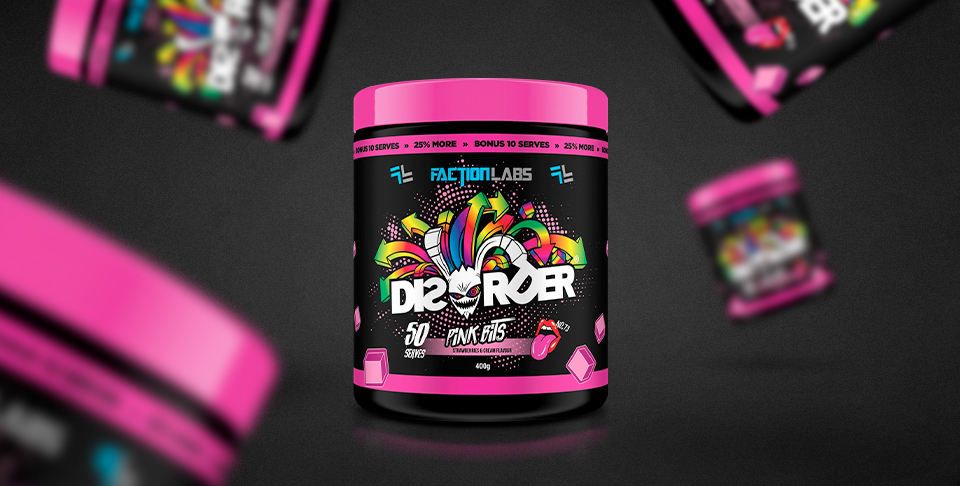 Other Uses for Disorder

Whilst 90% of users shall take Disorder as a pre-workout supplement there are other uses for Disorder. We note when viewing the Disorder Variety Pack packaging there are a number of images, suggesting what Disorders other uses may be. These images include gym, sport, study, work, party & gaming. Being an energy and cognitive enhancer it does make sense some people may use Disorder for these alternative pursuits.

Using a mid-level dose of caffeine anhydrous (250mg per full scoop) there is a couple of negative side effects one may experience. The first is feeling overly wired or jittery. Now this didn’t happen on our trial however for an inexperienced user it’s possible, thus again for new or inexperienced users please start with one scoop or less. The second is the feeling of beta-alanine tingles, this is a good thing meaning this ingredient is working as it should. The third side effect which is more likely to happen though is a slight crash or come down when the pre-workout starts wearing off. The reason for this is caffeine anhydrous peaks in your blood within 30-60 minutes, this is fast-acting, then it begins to come off and does so at a reasonably fast pace. During this period it is possible to experience slight nausea or feeling somewhat off. Again experienced pre-workout users shall likely have no issues.

With any pre-workout, there is the potential for misuse. Thus being a strong formula please don’t go doing stupid doses of Disorder. Rather please always begin on the one-scoop dose (or less) to assess your individual tolerance to the stimulant effect, then proceed higher. Always follow the manufacturer's label instructions. Do this and healthy users shouldn’t have safety concerns. Additionally and to update on this point of safety. After years of retailing Disorder at Mr Supplement and at the time of writing, we have not received any feedback from customers pertaining to a serious safety concern. This is good news.

In late 2020 there was a period where Disorder was taken off the market and unavailable for sale. It was thought to be banned by the public. At that time Disorder was subject to a review by Australian regulators however after 4 weeks was made available again. There was also a slight reformulation at this time.

When to Take Disorder

We’d recommend taking Disorder 15 minutes pre-workout which is a short enough time for it to kick in whilst also lasting you a full 60-minute gym session. Should you want a good night's sleep and due to the caffeine and stimulant content, we’d also recommend not taking it after 6 pm in the evening. That is unless you have a high tolerance to stimulants.

Disorder is a high-quality pre-workout that’s sure to get you up and going providing the energy, focus, mindset & pump that’s sure to please. Should we have made any change to the formula though, it may have been the inclusion of the ingredient Theacrine in lieu of some of the caffeine anhydrous amount. Theacrine also a stimulant has been shown to support lowering the stimulant side effect, thus reducing stimulant crash. Really though and for nearly all users Disorder is a winner, it does the job, tastes great, comes in a variety of sizes including 25 serves, 50 serves or a 12 satchel trial pack. It has cool funky labelling and is sure to have you feeling fantastic and in the zone fast. Go on, give Disorder a try.