Traditionally recognised as the ‘fast’ and ‘slow’ proteins of the sports nutrition world, whey and casein are the two pillar proteins of sport supplements. But which one is better for putting on weight or improving performance? It’s one of the most common questions that come up, particularly for novice bodybuilders or supplement users. Unfortunately, the answer is not as straight forward as some people like to make it.

First things first…what are the basic characteristics that define whey and casein? While they are both milk-derived, whey and casein differ significantly in their amino acid composition and absorption time. Whey protein is water soluble and is quickly digested in the body, earning it the “fast protein” title1-4. Alternately, casein is water insoluble and coagulates, resulting in a slow-release mechanism of amino acids that is sustained at increased levels in the body for a longer period of time; hence the name “slow protein”. Naturally, with these major differences, it’s reasonable to expect the proteins may differentially affect response to training. But the findings from some of the studies exploring these questions are somewhat mixed.

Interestingly there have been a number of studies which have sought to compare the relative effects of casein and whey protein supplementation in conjunction with a weight training program. In each of these studies, the general trend observed is one of a high muscle protein synthesis response with whey and a stronger inhibition of protein breakdown with casein. However, a number of these studies have only measured muscle protein breakdown at the whole body level1, 3, 5, which varies significantly from protein breakdown specifically within skeletal muscle tissue. To be specific, skeletal muscle only makes up 25-30% of whole body protein synthesis6 and its turnover rate is much lower (i.e. ~20) than that of more rapidly-turning-over gut7, 8 and proteins in the blood9. So one has to cautious about studies of casein and whey that measure protein turnover at the whole body level as it may not be reflective, or even representative, of the anabolism of muscle proteins.

The best study published to date that answers the question of how whey compares with casein for putting on muscle is one published by Canadian researchers in 20094. This particular study compared the muscle protein synthesis response to an equal dose of whey, soy and micellar casein after a bout of resistance exercise4. However, this study went one step further by only measuring muscle protein synthesis in skeletal muscle as opposed to the whole body level. The major findings of the study are summarised in the graphs below.

Calcium caseinate is another type of casein, albeit much less common and less popular than micellar casein. One of the most thorough and detailed studies on the comparative effects of whey and calcium caseinate on muscle anabolism after resistance exercise was published in 2004 by researchers from Texas16. In this particular study, subjects were given either 20g of calcium caseinate or whey 1 hour after a single bout of resistance exercise that involved leg extensions16. Researchers measured the difference in insulin and amino acid responses with the two proteins. The researchers were also clever enough to specifically measure protein synthesis of skeletal muscle as opposed to whole body. The graph below shows the significant difference in insulin responses between proteins. Whey protein elicited a much higher and sharper insulin response than calcium caseinate, which explains in part the differences in rate of appearance and disappearance of amino acids in plasma.

Being the body’s key storage hormone, insulin helps shuttle both glucose and amino acids into muscle. As such, the strong insulin response elicited by whey protein may be a key factor helping to rapidly clear amino acids from plasma. This would explain in part the trend for amino acids to sharply peak in plasma and then drop rapidly. Plasma amino acids from caclium caseinate by contrast display a more gradual rise and drop, presumably because calcium caseinate doesn’t stimulate insulin secretion as much as whey and also because of its slower digestion.

The differences in rate of appearance of amino acids in plasma led to differing stimuli on muscle protein synthesis over 6 hours. Whey protein produced a stronger stimulus in the first three hours, while casein was stronger in the ensuing three hours, as shown on the graph below. Interestingly though, when taking the entire 6 hour period into account, both proteins had similar effects on muscle protein synthesis.

The findings of this study contrast with the one highlighted previously, presumably because of the different types of casein used. Contrary to popular believe, calcium caseinate, as distinguished from micellar casein, is soluble (and is thus used in numerous food processes), and so digestion rates of this form of casein are not likely to be overtly different from those of whey12. This probably explains the relative lack of difference in overall muscle protein synthesis rates when measured over 6 hours.

Pre- and Post-Workout Whey vs Casein

In addition to the above studies, a very recent study sought to compare the effects of pre- and post-workout whey versus casein. The study involved a group of NCAA Division III female basketball players, who were subject to a comprehensive agility and conditioning protocol together with a resistance training protocol that ran for 8 weeks10. As part of the study, subjects took either whey or casein protein 30 minutes before training and immediately after. There was no placebo group. Both groups ended up significantly improving their agility and strength, with the subjects in the whey group experiencing greater weight loss (i.e. -2.0 +/- 1.1 %bodyfat vs -1.0 +/- 1.6 %), bigger lean mass gains (i.e. WP: 1.5 +/- 1.0 kg; CP: 1.4 +/- 1.0 kg) and greater 1RM leg press and bench press. However, all these improvements in strength and body composition were not significantly different between groups. It’s hard to say whether this may have changed if the researchers had more participants in the study. The study also employed some very advanced agility protocols (i.e. ladder sprints/drills, side shuffle runs, rope drills) which are highly sport specific and therefore may not be broadly applicable to the wider sporting populations. There’s also the question of whether the results may have been different in men. So it’s hard to take make any firm conclusions about the superiority of whey or casein for pre- and post-workout based on this study alone.

While whey protein is generally accepted as the best protein for actuely stimulating muscle protein synthesis, casein has always been held in high regard for its anti-catabolic properties, namely, it ability to prevent muscle tissue breakdown. A commonly cited study regarding casein’s ability to prevent muscle protein breakdown was published in 2012 and measured the effect of casein ingestion prior to sleep on muscle protein synthesis and breakdown overnight13. Following an evening resistance workout, subjects in this study received a meal with 20g protein and 60g carbohydrate. Then 3 ½ hours later, subjects received 40g of casein protein. Despite going to bed 30 minutes after, the casein was still fully digested while sleeping and resulted in a sustained rise in blood amino acid levels throughout the night; the result of which was a sustained increase in muscle protein synthesis and a decrease in muscle protein breakdown. The drawback with this study is that there was no control group in the form of placebo or a whey protein. Also, the study was only carried at on a single occasion for one night. It’s not clear whether the pattern of increased muscle protein synthesis and reduced breakdown would persist with repeated use.

Whey vs Casein for Recovery and Injury

Another question that has been explored in the comparison of whey and casein is their relative effect on muscle recovery following injury or immobilization such as a cast. Researchers from Clemont University in France compared the effect of whey or casein supplementation in rats that had their ankles immobilized by casting for eight days14. Whey proved to be more effective than casein in restoring muscle function in the form of force and power. In the case of injury, where a muscle is immobilised or not used, muscle protein loss occurs ultimately as a result of a decrease and increase in protein synthesis and breakdown respectively. But once muscle use is resumed, this tends to dramatically halt muscle protein breakdown. Therefore to regain muscle mass, stimulating muscle protein synthesis is of paramount importance. This may be the reason that whey protein proved more effective in restoring muscle function, because it acts as a more potent acute stimulator of muscle protein synthesis. 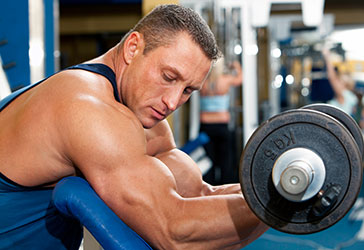 Whey vs Casein for Muscle Gain

How to Use Whey & Casein

Considering the above information, perhaps the best way to maximise the use of both casein and whey is to use whey as the predominant post workout protein and then supplement with casein at night before bed. More precisely, if one is concerned with maximally optimising muscle protein synthesis as part of an aggressive resistance exercise program, it appears the best way to use whey protein is to supplement in three hour intervals throughout the day, in addition to using casein at night.