Few Australian brands and supplements have reached a level of cult status within the nation’s bodybuilding and weight training fraternity. Mass Muscle Fuel (MMF) from Elemental Nutrition has done just that in a little over 7 years since it has first released. Having built a reputable following for its original version; Massive Muscle Fuel Hardcore, Elemental Nutrition have recently released their upgrade to the original MMF, the Massive Muscle Fuel 2.0. So how does the latest version of MMF stack up against the original and will the supplement retain is cult like status?

Like the original, Massive Muscle Fuel 2.0 comes in both a smaller 285 mL (9.6 ounce) version or a larger 1 Litre (33.8 ounce) version. As with the original version, the smaller version comes in the uniquely designed, 2 lidded, squeezable dosing bottle. This allows for easy measuring of suggested single serves or for larger serving sizes if required. Unlike its predecessor however, the larger version comes in the same standard, 2 lidded squeezable packaging rather than the original cuboid casing. The benefit of using the same package design allows for easier and mess free measuring of servings, unlike the old version which required separate measuring. Other than that, few things have changed aesthetically. More modernised labelling and a change in colour of the Massive Muscle Fuel liquid completes all the major packaging changes.

As the saying goes, ‘If it ain’t broke, don’t fix it’. Massive Muscle Fuel follows the same principles by keeping all of the original ingredients, but have boosted their formula with 17% more protodioscin, the key active ingredient of the original formula. They have also built upon the original formula by introducing the synergistic combination of Arginine HCL, Methoxyisoflavone, Bulbine Extract, Diadzen and Saw Tooth Palmetto. In essence, MMF 2.0 has stuck with what worked and have included a range of other potent ingredients to enhance its function. 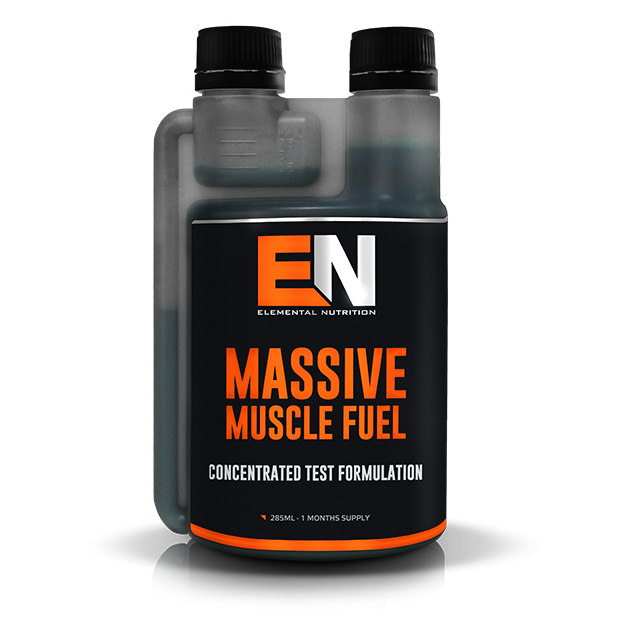 The original Massive Muscle Fuel wasn’t what you would call good tasting or even pleasant tasting. But as many of you would already know, what’s good for us doesn’t always taste the best. The new formulation has tried its best to tackle the taste issue and their efforts have succeeded somewhat. The new formula definitely does taste much better than the original, but still tastes strongly of herbal medicine. Having said that, one can only do so much for such a concentrated formulation. Most users of MMF 2.0 have followed the original method of mixing it with juice or shooting the 10 mL serving size with a swig of water. Either way, make sure you have plenty of water on hand to help wash away the strong dye present in the formula. While safe to consume, the dye does leave a temporary stain on the tongue and teeth unless rinsed away.

Massive Muscle Fuel 2.0 comes in two sizes; the smaller 285 mL or the 1 litre version with a recommended serving size of 10 mL. As such, the smaller version would last around 4 weeks, while the larger version offers a 100 day supply of the product. Oddly enough, the larger size doesn’t offer a better deal in terms of pricing, so it would simply be a measure of individual preference. In terms of cost and value, Massive Muscle Fuel 2.0 has a similar price range to most other products belonging in the testosterone boosting category, but considering the potency of the product (to be discussed in the following sections), it offers much more potential value in terms of results than the other products.

The original Massive Muscle Fuel was by far one of the most popular testosterone boosting supplements in the Australian market. With an extremely potent amount of protodioscin; on average 4 times more than any other testosterone boosting supplement on the market, Massive Muscle Fuel 2.0 improves on that amount by boosting its protodioscin content by 17%. This means that on average, MMF 2.0 contains 500% more protodioscin than any other test boosting supplement. Since the compound is the most active portion of tribulus, having 5 times more of this active compound easily beats the competitors hands down.

The inclusion of the new ingredients is a great idea, considering the multiple list of benefits each ingredient can provide such as improved lean muscle mass, improved testosterone and growth hormone synthesis and decreasing the conversion of testosterone to DHT (dihydrotestosterone); all of which potentially means greater growth potential and greater anabolism and sexual drive. The improved flavour profile of version 2.0 makes it a much more palatable way of getting the ergogenic results you want.

While there are new ingredient inclusions in Massive Muscle Fuel 2.0, all of which offer great potential benefits, it would be fantastic to see Elemental Nutrition increase the amount of each ingredient. Understandably, this would increase the serving size, but gathered the fantastic praise the original version had, there’s extreme doubt that even doubling the serving size to 20mL would result in much furore if it were able to dramatically improve the results gained. A minor con is the dye component of the supplement which can be a hassle at times to get off, especially if spilled on clothing and could definitely be something Elemental Nutrition considers removing in future revisions of the product. The absence of a reduced price for a bigger serving size is an oddity, but nothing to lose any sleep over.

As previously mentioned, the new Massive Muscle Fuel 2.0 contains the original formulation of Tribulus Extract containing the active compound protodioscin as well as a zinc, magnesium and vitamin B6, the 3 well known compounds of the popular supplement ‘ZMA’. Let’s take a look at some of the research surrounding these ingredients:

Tribulus Extract (Protodioscin) – Tribulus is a plant popular in folk medicine of the countries in which it is widely found including India, China, Bulgaria and South Africa and has long been used as a treatment for sexual impotence, cardiovascular diseases, abdominal distension and oedemas (increased fluid in tissues). The Tribulus used in Massive Muscle Fuel 2.0 is Tribulus Terrestris, the most widely used species. Protodioscin, the most dominant part of Tribulus Terrestris is also considered the most active compound of the plant and the quality of Tribulus is measured via Protodioscin content.

ZMA – Zinc, Magnesium and Vitamin B6 constitute the popular bodybuilding and training supplement ZMA. A commonly used testosterone boosting supplement, all components of ZMA are necessary for proper and ideal functioning of the body.

Massive Muscle Fuel 2.0 also contains a variety of new ingredients such as Arginine HCL, Methoxy-7-Isoflavone, Bulbine Extract and Saw Palmetto. Let’s take a look at each individual ingredient to see what it does.

Arginine HCL – One of the 20 amino acids which helps make proteins in our body, this form of Arginine is paired with a hydrogen chloride molecule to improve its absorption profile and its taste. Arginine has been shown to help with increasing blood flow through increasing blood vessel size. It is also commonly known as one of the few amino acids which can affect growth hormone levels by stimulating the anterior pituitary gland. Studies have been able to show improved strength, endurance and helped with erectile dysfunction with the use of arginine.6,7

Methoxy-7-Isoflavone – Also known as methoxyisoflavone, the compound is found primarily in soybeans and is reported to assist in the natural production of testosterone in the body. Studies have been able to show improvements in lean muscle tissue and a concurrent drop in body fat percentage with methoxyisoflavone supplementation.8

Bulbine Extract (Daidzein) – Bulbine Natalensis is a plant traditionally used to treat male sexual dysfunction in South Africa. Increasing interest in the plant has resulted in multiple research articles supporting this improved sexual function activity of the plant as well as potent anabolic and androgenic effects with increases in testosterone levels.9,10 Daidzein, a prime component of Bulbine is a isoflavone, also commonly found in soybeans which can exert both estrogenic and anti-estrogenic activity on the body. While there was an original controversy as to how daidzein worked, more recent studies showed that increasing daidzein levels in the body resulted in increased testosterone synthesis due to its affects on a hormone producing regulatory protein.11

Elemental Nutrition’s Massive Muscle Fuel has stood the test of time and stood the test of competitors to develop a devout following in the bodybuilding and lifting community. Their latest reformulation has included a variety of new ergogenic ingredients to tie in with their tried and true original formula of protodioscin and ZMA. Overall Massive Muscle Fuel 2.0 has few flaws and will keep the fans happy whilst making plenty more new ones. A great adjunct to other testosterone boosters or anti-estrogen supplements, Massive Muscle Fuel 2.0 retains its crown as THE most potent Tribulus product on the market today.