Creatine - Does It Work?

Creatine is often considered by the training and sports science community as one of the most powerful and effective supplements there are. In fact, creatine can be said to be truly the ‘best supplement’, if you take into account that protein is an essential nutrient that can be easily obtained in ergogenic quantities from the diet. With almost a century of research behind the compound, most with positive results in relation exercise, training and growth parameters, there are still questions as to the effectiveness of the supplement. This article then, aims to detail the many benefits of creatine and also debunk any common myths about the supplement so that you can make the best and most informed choice about the supplement. 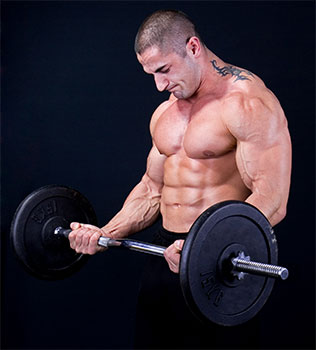 Creatine as a supplement is used for a variety of applications, with one of those being to gain lean mass. Creatine is well known for its ability to increase power output as it is involved in the generation of ATP (our main energy source). This is especially useful in powering through tougher training sessions involving the lifting of more weight. In fact, creatine can result in a 78.5% increase in power compared to a placebo. More power to lift will mean greater stimulus for muscle growth.  The other way that creatine can support muscle growth is through the increase in fibre size through the influx of water, known as cellular swelling; a common trait of creatine and carbohydrate use. This swelling can actually result in a decrease in protein oxidation due to the cell signals that are alerted when the muscle swells.

Creatine is rarely used specifically for fat and weight loss. After all, most people tend to gain weight with creatine use, however the majority of this weight is due to gains in water weight and lean muscle mass rather than body fat mass. However, the gains in lean muscle mass during the period of creatine intake is extremely handy when it comes to maintaining a healthy body composition later on thanks to the fact that lean muscle mass is metabolically active. That is, muscles are directly related to our metabolic rate. More muscle means a higher metabolic rate and therefore greater energy ‘burned’ throughout the day. Creatine has also been shown to affect glucose kinetics in our body, with positive changes to a glucose response with food due to the increase in its transport into our muscles rather than being stored as fat.

The use of creatine for joint pain is a fairly new application with research still debating its effectiveness. People with osteoarthritis (OA), a condition in which the joints degrade due to breakdown of cartilage and bone have been shown to benefit from creatine supplementation with improvements to stiffness, pain and physical function. However, there have been similar studies which have not found any significant benefit to creatine supplementation. Joint pain conditions such as OA can be somewhat alleviated with weight loss thanks to a decreased load on the actual joint. Creatine’s ability to support better body composition can assist with this weight loss effort and therefore indirectly with joint pain.

Whilst creatine is often used more for weight training and resistance exercise rather than aerobic, cardiovascular exercise, there is some evidence to suggest that it can be useful for these types of physical activity. Creatine use helps to spare glycogen due to the improved ability of the body to utilise phosphocreatine stores as faster sources of energy. What this means is that you can spare this important glycogen to sustain longer periods of cardio and aerobic exercise such as jogging and running. Overall however, there is actually very little evidence to suggest any serious benefits to jogging and running. However it has been shown to support shorter duration aerobic activity such as sprints thanks to the improved phosphocreatine resynthesis with creatine supplementation. Interestingly, middle distance swimming up to 400m benefited from creatine supplementation, especially during the last sprint stages of the event.

Most trainers tend to use creatine during bulking and weight gain cycles due to its strong ability to help increase body mass. Many people have insisted that the majority of the weight gain from creatine supplementation is due to water weight and while you do gain water, creatine supports a substantial amount of lean muscle mass growth over time thanks to creatines ability to support workout performance. As previously mentioned, the water weight gain will also help to slow down protein oxidation, thereby influencing nitrogen retention, which assists with muscle growth and recovery. As creatine supplementation subsides, the water weight will go, but what you gain is plenty of extra lean muscle tissue. In fact, creatine along with the right nutrients can double the amount of muscle gained with training over that of non-creatine users.

Does Creatine Make You Fat?

A common question from creatine users, creatine has not been correlated with increases in fat mass nor calorie intake. The only way that creatine would be able to make you fat is if you deliberately aimed at increasing food intake over the period of taking creatine; which is actually quite a common occurrence since most people tend to be bulking whilst supplementing with creatine. Creatine is notorious for increasing water weight, however this usually dissipates upon termination of supplementation.

Does Creatine Go Off?

Creatine is usually a very stable product, especially when kept in a dry and stable environment away from moisture, humidity and heat. Creatine generally has a shelf life of roughly 2-4 years, with pure creatine powders tending towards the longer end of the spectrum. It’s unknown whether creatine starts to degrade as there haven’t been any studies on the topic, however, one would assume that a creatine that is four years old may not offer the same ergogenic effect as a fresh batch of creatine.

Does Creatine Cause Acne?

There have not been any studies on the use of creatine and acne occurrence. Some suggest that if creatine results in changes in androgen concentration, then acne occurrence can be increased. Androgens such as testosterone are known for their ability to affect sebaceous gland activity, which produces the oily substance known as sebum. High sebum content is strongly correlated with the presence of acne. Acne has never been a common side effect of creatine supplementation, so you shouldn’t have to worry too much about it. Good hygiene should be more than enough to prevent any outbreaks.

Creatine is metabolised into creatinine in the body, which itself is a sign of muscle breakdown in the body or reduced kidney function in normal circumstances. However with high dose supplemental creatine, the natural conversion into creatinine may result in a false positive result of kidney issues or muscle breakdown when in fact, none of these issues are occurring. One case study was able to show that a regular loading and maintenance supplementation schedule resulted in no issues for a man with a single impaired kidney. There is very little evidence to suggest that creatine at the doses often recommended would result in any impairments to kidney function or any other organs.

Creatine - Does it Work?

Creatine is an amazing supplement. It's great for muscle growth, body composition, exercise performance and joint pain among a long list of other benefits. Furthermore, it's safe to use with very few side effects and contrary to many myths, does not cause acne, make you fat or lead to poor kidney function. If there's one other supplement other than protein that will give you the gains and results you're looking for, then creatine is it.