What is Inosine? (also known as)

Inosine is a nucleic acid or nucleoside derivative1, which is a purine base, comparable to well-known DNA bases, adenine and guanine.

Where Does Inosine Come From?

Inosine has several theoretical metabolic roles that could provide an ergogenic benefit, including being a precursor to 2,3-diphosphoglycerate formation (an endogenous metabolite shown to increase the haemoglobin carrying capacity of blood2, 3), a stimulus for insulin release, resulting in carbohydrate uptake by cardiac tissue4. In addition, inosine has been shown to increases cardiac contractility and is a vasodilating agent5, 6. 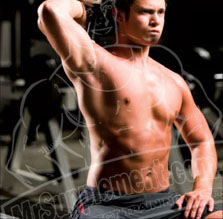 However, all of these earlier studies where performed in animal models1 or via intravenous infusion in man3, so it was hard to say at that stage whether oral supplementation with inosine would have ergogenic effects in humans. Despite this, in the early 1980's, Russian and Eastern Bloc weightlifters began to experiment with inosine supplementation, and as a result many anecdotal claims about its ergogenic effect on strength surfaced1. As a result the use and popularity of inosine supplementation in sport increase during the late 20th century.

Negative Side Effects of Inosine

While exhaustive studies on possible negative side-effects of inosine supplementation have not been carried out, the few studies that have been conducted in humans have used relatively high doses ranging from 5 to 10g, which is relatively higher compared to the average level in sports nutrition supplements.

While studies in humans have used between 5 and 10 grams per day, such levels are not typically recommended.

A limited number of companies sell inosine on its own as a pure powder. Otherwise it usually features in pre-workout supplements.

Despite the lack of supporting studies, inosine is purported to have both anaerobic and aerobic benefits. Therefore, inosine can be stacked with popular pre-workout nutrients like creatine, beta-alanine and citrulline etc.

The studies conducted in humans, where subjects were taking 10 grams a day, did not report any negative side effects or toxicity. Given 10 grams is much higher than the usual dose of inosine, supplementation with inosine in more moderate doses such as 1-2 grams is thought to be relatively safe.