Optimum Nutrition is one of the most popular and well regarded supplement manufacturers out there. The company is best known for the hugely successful Gold Standard 100% Whey, which is the number one protein supplement in the world, but this company is far from being a one trick pony. 100% Whey is one in a large range which includes a number of proteins, including two mass gainers, Pro Complex Gainer and Serious Mass. Why would a company release two products in the same category, and which one is better? Let's take a look. 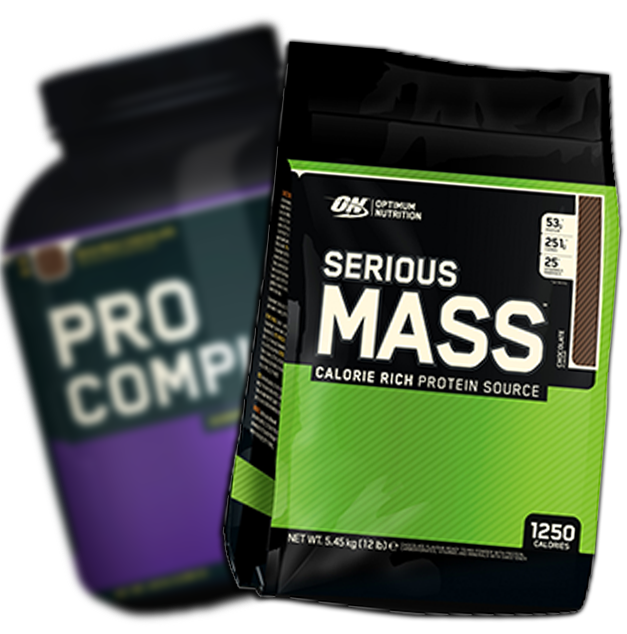 Although both mass gainers are based on protein and simple carbohydrates with a blend of vitamins and minerals, These are very different supplements.

Pro Complex Gainer is a lean gainer, which means that the proportions of protein and carbohydrate are about equal. In this case, each 165g serving contains 85g of carbohydrate, in the form of maltodextrin, to 60g of blended protein. This blend is quite comprehensive, and includes muscle building glutamine peptides alongside fast absorbing hydrolysed whey and whey isolate. The blend is rounded out with some slower absorbing proteins like egg albumen and sodium caseinate. The formula also contains a blend of healthy lipids, a vitamin and mineral blend, and added digestive enzymes.

Serious Mass is a hardgainer formula and lies at the other end of the spectrum. Each enormous 334g serve contains 50g of protein and 250g carbs. Despite this massive difference in protein to carb ratio, the formula is remarkably similar, with a maltodextrin base and a protein blend, which in this case, lacks some of the faster acting fractions, and whey concentrate sits alongside egg albumen and calcium caseinate. This formula is lower in fat than Pro Complex Gainer and lacks digestive enzymes, but contains small amounts of muscle building aminos like creatine and glutamine, which many people would consider to be underdosed.

Both products are very well dosed and suit the purpose for which they were developed. The serving sizes of both of these products are very large, Pro Complex Gainer coming in at 165g and Serious Mass recommending a whopping 334g. It is difficult to avoid large serving sizes in a well formulated mass gainer, and while these large sizes can be quite filling, you can easily break the dose up intwo 2-4 serves to be had throughout the day rather than one large hit. This will make it easier to also consume a higher calorie diet overall to help you gain size. 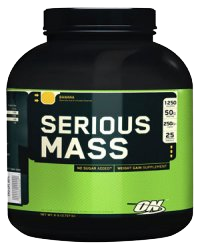 This is another apples and oranges comparison. With similar amounts of protein and carbohydrate, Pro Complex Gainer is perfect for people with slower metabolisms who want to gain muscle, but not fat. This is a favourite of the slightly older crowd and those who are prone to carrying a bit of extra weight. On the other hand, there is no way anyone using Serious Mass according to the directions will fail to put on weight. This is a super high energy product designed for people who cannot gain weight. Many people with fast metabolisms, particularly younger men, have trouble obtaining enough energy from their diets to maintain weight and body fat, let alone putting on extra muscle. For these people, a product like Pro Complex Gainer would not provide sufficient energy, and vice versa – someone with a slower metabolism who used Serious Mass as directed would put extra weight as fat.

High in Carbs, mass gainers are probably the best tasting types of protein shake, and both of these offerings are delicious. Both proteins come in a range of classic dairy flavours which are well receieved. The large serving sizes of these proteins make mixability an issue. Pro Complex gainer recommends 165g of protein to 453mL of liquid, which is slightly too much for a standard 600mL shaker. It is a lot easier to make this in two parts, although a serving is a single scoop and it can be difficult to estimate what half a serving is. Mixing Serious Mass is a big deal, and 334g of protein in 709g of water almost doubles the quantities of Pro Complex gainer, although a half serve will fit in a 600mL shaker. 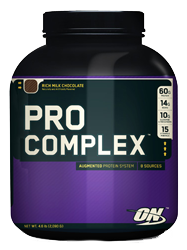 It is impossible to say that one of these proteins is better than the other, because they are both great at what they do. Pro Complex Gainer is an excellent product for people with slower metabolisms who want to minimise fat gain, and Serious Mass is one of the best super hardgainer formulas on the market. The key to choosing the best mass gainer is to choose the one that best complements your own goals and requirements.