Litramine Review. What is it?

Litramine is a weight loss aid that attracts and binds tightly to fat within the GI tract, preventing it from being absorbed, instead sweeping it out of the body as waste. A trademark of a company called InQpharm, Litramine is a proprietary complex of different plant fibre types. Litramine has just hit the market and is making a big splash in the US on the back of some very convincing clinical trial results, and has even been championed by the likes of health guru Dr Oz. 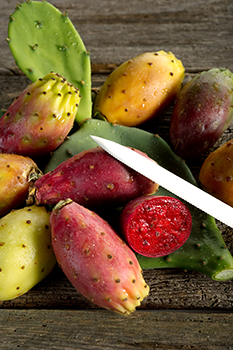 Where does Litramine Come from?

InQpharm are being secretive about the exact make up of Litramine, but we know it is derived mainly from fibres of the plant Opuntia ficus-indica, supplemented with soluble fibres from various species of Acacia, and processed using fibres from Zea mays (or corn). Opuntia ficus-indica is a species of cactus which is also known as Prickly Pear. It is thought to be native to Mexico where it is widely cultivated and forms an important part of the agricultural economy. Opuntia grows throughout Mexico, the Mediterranean, and Northern Africa, and both the leaves and the vitamin C rich fruit are used to produce food and drink.

The research that has so far been conducted has shown great promise for Litramine as a weight loss aid. 123 overweight people participated in a trial of the product which assessed weight loss in conjunction with a calorie controlled diet. Half received 3g of Litramine per day and the other half received a placebo. Those who received Litramine were shown to have lost significantly more weight over 12 weeks (3.8 ± 1.8 kg) than the group who received the placebo (1.4 ± 2.6 kg). The study also found that a greater percentage of the Litramine group lost more than 5% of their body weight (1). In addition, Litramine was well received by the study participants, and no adverse side effects were recorded by trial participants.

The manufacturers note that Litramine is more effective than Opuntia ficus-indica extract alone, that it is free of known allergens, and that is has a well established safety profile (2).

Whether preparing for a competition, or just trying to drop excess fat, cutting can be difficult for many people. This is evidenced by the huge range of weight loss aids that are available. Litramine, as a proven effective weight loss aid, could be of great benefit as a stand alone product, or as an ingredient in a fat burner or weight loss protein.

Litramine shows enormous potential to help people control their weight, and the single research paper is very convincing, but more evidence is really needed before we can definitively say that it is effective. It is likely that this will come with time, as Litramine is still very new.

Blocking fat from entering the body has the potential to limit the absorption of fat soluble nutrients such as vitamins A, D and E, and essential fatty acids. This may require cycling of the product, timing of intake, or monitoring serum levels of these nutrients if Litramine is used long term.

There is not a lot of dosage information, but participants in the successful research trial were taking 3g per day. An educated guess is that would be split into three 1g doses to coincide with meals.

Being new on the market, Litramine has not yet been incorporated into many products. It is generally available as a single product supplement, although it is sometimes fortified with fat soluble vitamins A, D and E. Litramine would be a fantastic addition to a fat loss protein like Shredding Matrix, or to a fat burner like Oxyshred.

Litramine will stack well with other fat loss products. It is important to stagger doses of any functional fat supplements, like fish oil, evening primrose oil, or fat soluble vitamins, because Litramine will bind them and prevent their absorption into the body.