Ginseng is the collective name given to a group of plants found in North America, Korea, China, and Siberia, which have been used for centuries as herbal health tonics in those parts of the world. Over the last few decades, ginseng has made its way into western culture for its potential health benefits as well as anti-stress, strength and endurance boosting properties.

Where does Ginseng Come From?

Because ginseng can be found in various parts of the world, they can be classified according to origin. Korean and Chinese ginseng can sometimes be referred to as Asian ginseng, these along with American ginseng, are considered "true" ginseng, as characterised by the presence of fleshy roots and the active ingredients ginsenosides. The Siberian ginseng, despite its name is actually only a distant relative of the previously mentioned ginsengs. It has a woody root, and instead of ginsenosides, contains eleutherosides. Where things get tricky is the fact that there are multiple types of ginsenosides and eleutherosides present in ginseng, and each of these have multiple functions within the body. Extraction method, handling, and season of picking all affect the amount and type of these active ingredients that end up being consumed. So needless to say, not all products are the same.

Ginseng has been used for centuries in traditional medicine as a health tonic to elevate stress, promote health, increase stamina and strength, and also as a stimulant and aphrodisiac. These effects are well known and have been promoted throughout history. But it was only within the last few decades that thorough scientific research has been conducted on ginseng. 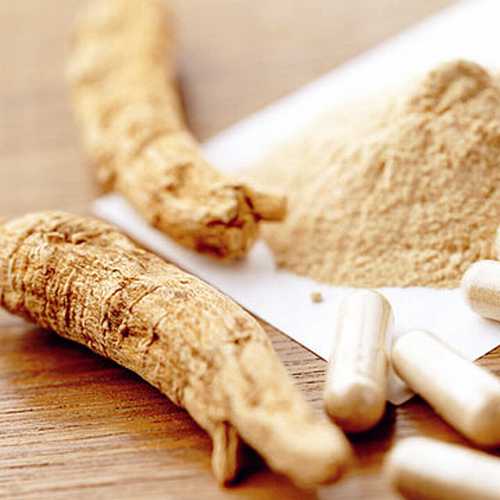 There has been a large amount of research documenting the positive effects of ginseng on both physical and mental performance.  Some studies have suggested that ginseng is capable of improving focus and concentration (Revers et al 1976; Carr 1986). These are some qualities that may be of help to enhance a training session. Numerous studies have shown that ginseng resulted in improvements in endurance, heart rate, lactate production oxygen uptake, and breathing capacity (Forgo & Kirchdorfer, 1982; Forgo & Schimert, 1985; McNaughton et al, 1989; Pieralisi et al, 1999). These are all indicative of ginseng potentially allowing bodybuilders to train harder and longer before exhaustion. One well designed study showed that 1000 mg ginseng supplementation over six weeks increased pectoral and quadriceps strength of subjects by 27% and 18% respectively (McNaughton et al, 1989). On top of all these properties, ginseng may also prevent the loss of physical fitness after a 10 week break from training (Bubbi, 2000). Thus, ginseng may not only show ergogenic properties when commencing supplementation before training, but should you be unable to train for a period of time, it may also help prevent untraining.

Ginseng Safety and Side Effects

Ginseng is nontoxic and is generally well tolerated among people. However, there are some cases of mild side effects. In rare cases, ginseng may cause insomnia. This is to be expected of a herb that is known to be a stimulant. Much like caffeine, if you suspect that your sleep may be disrupted, do not consume ginseng products in the evening before bed. Furthermore, it is possible to overdose on ginseng, so if you experience stomach upsets, it may be wise to reduce your dose. Ginseng supplementation is not suitable for people suffering from high blood pressure, and should not be mixed with drugs such as phenelzine, alcohol, and warfarin. Please consult a healthcare professional if you think you think you may be at risk of side effects.

After reviewing a series of studies, it was found that the effect of ginseng on improving performance was strongest when supplementation occurs with 1000 mg Asian ginseng dry root extract, for over eight weeks (Bucci, 2000). Again, it is worth mentioning here that the type of ginseng may affect its efficacy.

Out of all the varieties of ginseng, Asian ginseng (Panax ginseng) is the most studied. The above mentioned effects are all related to Asian ginseng. Investigations into Siberian ginseng show more variability in results. Even though any form of ginseng can be found for sale, it is in this writer's opinion to aim for Panax ginseng when considering supplementation. Furthermore, the root of the plant is the most sort after, so look for products containing this, as opposed to leaves. Dried roots can be found in traditional medicine shops and teas. However, more popular among athletes and bodybuilders, are the commercial preparations. These include, but are not limited to, standalone ginseng supplements, pre workout supplements, fat burners, multivitamins, and amino acid blends. So in short, it is very easy to find ginseng in supplement mixtures, just keep an eye out.

Ginseng  can be seen as a multivitamin and taken on its own. However, as it has applications for bodybuilding and the potential to boost performance, it can be stacked with a pre workout supplement.