Acidophilus is a species of bacteria belonging to the Lactobacillus genus. They are probiotics and are considered to be good bacteria because they help fight off bad bacteria in the digestive system, as well as maintaining overall health. You can learn more about probiotics in our "Prebiotics & Probiotics" article.

Where Does Acidophilus Come From?

Acidophilus means "acid loving" in Latin, and this gives u a hint as to where they can be found. They can naturally be found in the gastrointestinal tract, mouth, and vagina of people. Good dietary sources include fermented dairy products, such as yoghurt, and fortified foods.

Bacteria are needed in our digestive system to digest and absorb food. This is especially true for dietary fibre that we cannot actually digest on our own.

There is a constant battle between good and bad bacteria in your digestive system. Bacteria like acidophilus keeps bad bacteria such as E. Coli at bay. This is especially important for those who have undergone treatment with antibiotics. This is because antibiotics kill off both the bacteria causing the infection, as well the good bacteria such as acidophilus. Consequently, it is sometimes recommended by doctors that patients should consume acidophilus supplements to restore bacterial balance within the gut (Ouwehand et al, 2002). It has been found, in well conducted clinical trials, that probiotics such as acidophilus in combination with other Lactobacillus bacteria was effective in preventing diarrhoea associated with antibiotic treatment (Beausoleil et al, 2007).

For more information on the benefits of probiotics such as acidophilus, please read our article on "Prebiotics & Probiotics".

It has been found that subjects given yoghurt containing acidophilus for four weeks experienced a reduction of up to 3.2% in serum cholesterol. This translates to a reduction of the risk of heart disease by 10% (Anderson & Gilliland, 1999).

Acidophilus Safety and Side Effects

Acidophilus is safe for most people, even for children and infants. That's really no surprise, since kids frequently enjoy yoghurt. However, taking probiotics such as acidophilus may not be recommended for those who are immuno-compromised or are currently taking immune-suppressants. It is a concern that in such cases, the probiotic may grow too well, beyond tolerable levels (NIH, 2011).

A drug interaction to keep in mind is the obvious one. If you are taking antibiotics and want to supplement with acidophilus, try to separate these throughout the day. If you take them together, you'll simply be immediately killing all the bacteria you just ingested! 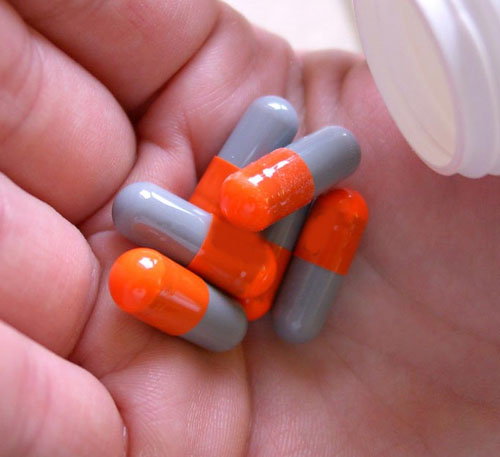 The recommended dose for acidophilus, or any other probiotic is generally 1 to 10 billion bacteria per day, divided up into 3 to 4 doses (NIH, 2011).

Acidophilus can be found in probiotic tablets, along with other species of good bacteria. They can also be found in Greens and antioxidant supplements. Some manufacturers put acidophilus into their range of protein powders.

When looking for acidophilus, keep in mind that their presence may sometime not be apparent on product labels. In these cases, you may simply find their genus, "Lactobacillus". This generally implies that along with acidophilus, the product also contains other species of that genus. Alternatively, some products may simply list "probiotics".

Acidophilus stacks well with other probiotics. This is why they often come as a blend of many probiotic species. In addition to this, acidophilus can be stacked with pretty much anything.